(The purpose of submitting this paper to the public is not to deride the United States Military services or the fine men and women who serve our country. The purpose of this revelatory story is to educate people about the undisclosed attacks being waged on our waters, our cetaceans and friendly neighboring, outer-planetary, civilizations who are here to be of service to us. J.O. )

As many people know who have had contact with Star people, it is customary to have the assistance of robots and high tech equipment to easily accomplish the menial tasks on ships and on other worlds. These robots or drones are designed for this. They are not sentient beings, but efficient machines. Many of these robots are programmed to operate Scout Ships that disembark from mile-long residential ships circling the Earth.
On occasion during landings on Earth or crashes on Earth, people have had contact with these robotics that are often designed to look humanoid. When people describe them, we hear the word "unemotional" regarding their affect and their demeanor. The robots are after all, machines. These robots are service drones that are mostly remote- controlled technology. Stating it simply, they are responding in a way similar to your TV set responding to your remote control unit.

The U.S. military has authorized the construction of similar technology, remotely controlling unmanned vehicles that are traveling underwater, traversing our oceans. These are fast moving oceanic homes for robot warriors and some humans. The underwater vehicles are warships and aircraft carriers. These giant warships contain hidden pools within, from which unmanned submarines are deployed and returned, unseen by most human eyes. Their weapon systems include vertical-launch missiles, ultra precise, which can shoot down or target incoming rockets, cruise missiles and unidentified flying objects (UFOs)

According to an article in a Popular Science magazine (February-March, 2008), last year aerial drones flew 258,502 hours of missions and the costs for these unmanned aircraft systems by the U.S. military is expected to be $3.76 billion by 2010.

Who is the U.S. Military targeting? The Low Frequency Active Sonar is deployed into the oceans of the world using Lethal decibels of brain shattering frequencies. According to an Exxon executive I know, it is a level far beyond anything normally needed for detecting underwater objects, oil deposits, schools of fish, submarines. The U.S. Navy is unchecked, going far beyond "Search and Discovery" in deploying these weapons of mass destruction in the ocean. Most of the details of these warships are in Classified intelligence archives dating back at least five decades.

Have we had a chance to vote on whether or not we want to weaponize the ocean?

This cover of an entire abstract on the U.S. Navy's plan to build manned undersea bases can be found in the highly recommended book: Underwater and Underground Bases by Dr. Richard Sauder. 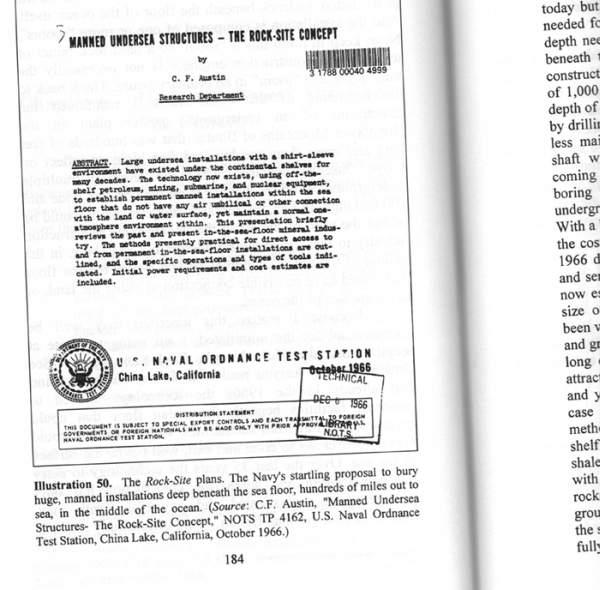 The United States Navy's "Rock-Site" concept calls for placing large, permanently manned installations deep beneath the bed of the ocean. Such facilities could be tens or even hundreds of miles out to sea. Tunnels can be driven beneath the sea floor, extending hundreds of miles up and down the Atlantic, Pacific and Gulf of Mexico coasts. The tunnels could originate on land and extend out under the ocean for many, many miles. Alternately, a manned undersea base could be constructed beneath the sea floor with no connection with land whatsoever. The technology to do this has existed for decades.
Source: Manned Undersea Structures: The Rock-Site Concept, by C.F. Austin. NOTS TP 4162. U.S. Naval Ordnance Test Station, China Lake, California, October 1966.

The Universe is built on Sound Patterns and because of this, many different worlds or dimensions can exist in the same space, unseen. These worlds reside in different octaves of light.

Disrupt a world or dimension by sending discordant frequencies into the field, and you may destroy the original carrier wave that is necessary for that world's existence. If you disrupt one dimension in this way, it effects others in close proximity to it, and they can collapse onto themselves. This is the larger danger of sending harmful frequencies such as the low frequency and mid frequency rays into the land, the air and the sea.

Eventually I will write more about this information that I received from the Humpback whales. If you have anything to share about this, please send an email. I would love to hear from you. joan@joanocean.com

Here are some drawings faxed to me by my good friend, Kinsley Jarrett who was taken aboard a friendly ET ship and witnessed these giant pools on the ship. The dolphins are not in captivity in these pools, they are interacting with the light and sound transmissions on board, assisting in the information storage and interpretation of frequencies and underwater activity on Earth. The cetaceans interact with civilizations who are friends of the Earth and who have the capability of living in underwater spaceships that guide and operate the advanced technology of frequency-shifting vibrations, balancing Earth's harmonic fields and allowing hyperspace travel. The dolphins and whales have profound wisdom to share with us. I encourage you to remain in contact with them. 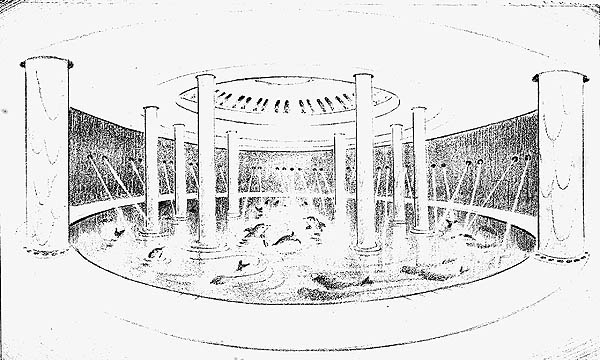 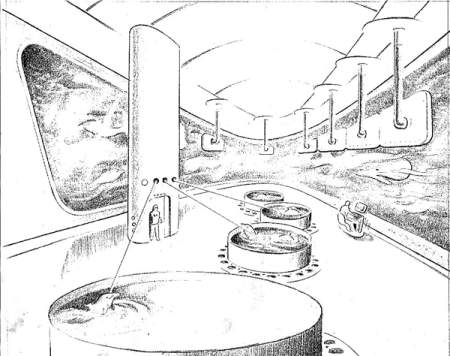 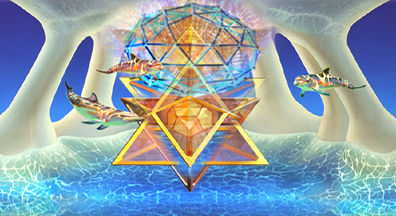 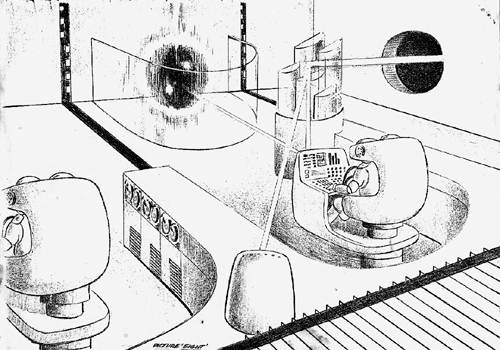 Kinsley and Jean-Luc ( pictures in colors here ) met in Australia in 1985 and connected because the physical experiences of Kinsley on the ET ship that are illustrated here in black and white, coincide with the holographic dimensions that Jean-Luc visits.

These space-time travels are being offered now in a new DVD and the geometries may well awaken in you some memories of how these wonderous energies hold our dimensions together. These experiences are artistically represented, because our technology is not fully able to reveal these multi-dimensional concepts .

Here is a little background on Kinsley Jarrett so that you can know him as I do:
This is an elderly man (86) who lives a quiet, unassuming life with his wife Val in Bellingen, Australia. From time to time he experiences a sensation in his solar plexus that is a sign to him to take his drawing pad and colored pencils and go into the woods near his home. As he would find a rock or log to sit on and remain in a quiet space with Nature, some of the other-dimensional life forms would reveal themselves to him. They felt safe in his gentle presence, and he, through his love, had the ability to see into their worlds. He would then draw pictures of them and receive their words in his mind. He would write the words and draw the little people on a large 24 X 18 newsprint pad. He shared these with me. At that time in 1985-1988, Jean-Luc and I lived in Australia. One day, Kinsley told us he had some new drawings from a new, little person that he had met. At his home we waited impatiently to see what he would show us. My 16 year old son, Joe, was there also. As Kinsley opened his drawing pad, flipping through the pictures we had already seen, he finally came to the new one, he so kindly would share with us. When I saw his latest drawing, I was surprised, but said nothing. I waited to hear Kinsley's story. He told us that he had been in a clearing in the woods when this Being came to him. He called him the Golden One. And indeed he had colored him with a golden and yellow colored pencil. The Being was radiant to see; beautiful, in fact. It had a big head, small body and large eyes that were shaded a soft brown color like the sensitive, alert eyes of a deer. A feeling of gentleness and friendship shown from the eyes. This was a humanoid being.
Kinsley proceeded to tell me that he made friends with the Golden One and agreed to meet him again over the next two days. And then Kinsley said, "Guess what? The Golden One told me he is not from this planet !!!"
That idea was new to Kinsley since he was unaware of all information regarding Star people or Extraterrestials. He led a very simple, happy life in his home near the woods, had contact with nature spirits, and was pleasantly surprised by this unexpected, unsolicited communication from an off-planet humanoid. At 2:00 PM on the following two afternoons, Kinsley met the Golden One in the woods and was then lifted up onto a spacecraft that hovered above him before traveling to the ocean where it proceded to submerge itself in the water. When Kinsley returned to Bellingen he made these drawings of what he had seen on the spacecraft, the home of the Golden One. The pictures, as revealed above, were faxed to me in Hawaii and do not show their colors. However for a sample of Kinsley Jarrett's fine artwork, click here to see some of his other drawings of Ascended Masters who also revealed themselves to him with their messages. Kinsley is a remarkable man. Because he had no desire for commercial projects and had no background in computers nor interest in circulating his artwork, these images remained in his notepad only to be seen by his friends. Thankfully, one of his friends who is a publisher, financed the printing and distribution of a book of Kinsley's art. These are some of his Ascended Master drawings.
He would draw these images as if he were a printing machine, starting at the top of the page and continuing down the page with his colored pencil, until the entire face was revealed on his pad. There are no images in this book of the Golden One, but it will always remain in my heart. When Kinsley communicated with these other-dimensional beings and transferred their likeness on paper, their love and compassion would shine through. And so it was with the Golden One. Kinsley saw these beings (and everyone else he met) as loving friends and that was the reality he manifested in his life and in his interactions with everyone.
Kinsley Jarrett, 1921-2008
(Kinsley, thanks for your guidance, your art, your love and your permission to tell a small part of your wonderful life.) 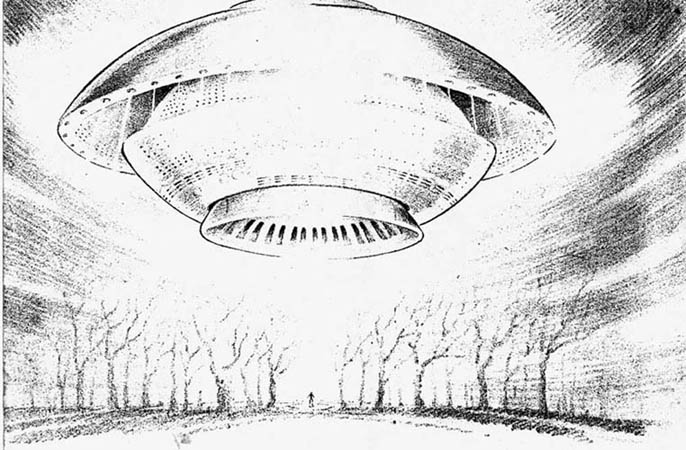